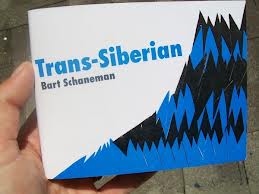 Trans-Siberian is a travelogue in mini-zine form making it the perfect size for globe trotting. It’s literally a pocket book of stories and observations about Bart’s travels from Korea to Russia via China and Mongolia.

The story begins with Bart having just finished a job in Korea. He flies to Shanghai, moves onto Mongolia and finally reaches his destination in St. Petersburg, Russia, home of his great grandfather, a Russian of German origin. In and along this route, and in no particular order, Bart interacts with fellow travellers on trains and in bars and hostels. He eats local cuisine. He is warned to be wary of the Mongols. He goes on an intercity car race with Russian teenagers. He drinks the local booze, takes in the scenery and is often times alone, under the stars with his thoughts.

Bart’s writing is well-paced and moves quickly with him as he glides through the cities and countrysides of Asia. His journalistic chops are in tact even as he keeps his writing on a very personal level which makes it interesting reading without being melodramatic—Chris Auman