Mike Wing says, "This is a great band on a great show!"

Hey, I got no problem with grown men crying, but save the drama for your mamma.

The Prophecy is being realized. My Predictions of an Apocalyptic War between Man and Monkey are beginning to look less like the Rantings of a Crazy Person and more like the Sage Wisdom of a Prophet. Urbandictionary.com defines 'D-Rider' as "someone who rides dick or is all up on your meat" or alternately, "a dusty kid in your crew". The liner notes to Mother of Curses, the debut record album by Chicago's newest elite music ensemble D. Rider, credits one "Deathrider" as the drummer, vocalist and strings-ist on it's accompanying musical collection. Quite the conundrum. And while we'll have to wait and see if we ever get to the bottom of this, in the meantime we can contemplate the music.

First a touch of background: Tha D, as we shall not call them, are the latest musical manifestation of Todd Allbbertt Rittmann. TAR is known to many as the tall "low" guitar player in U.S. Maple, and he may also be seen fucking around as a member of Chicago supergroup Singer and Northwest Suburban supergroup Cheer Accident. Rittmann (a.k.a. th'forementioned "Deathrider"), once again the tallest member of the band, sings lead and plays all the standard, manly "rock" instruments himself. He is invaluably augmented by Andrea Faught, who also works for Cheer-Accident, on keyboards, coronet and vox, as well as saxophonist/singer Noah Tabakin, of gonzo marching band Mucca Pazza.

Fans of U.S. Maple's singular knotty stumble will find much to like on Mother of Curses. The record represents a clear departure as it eschews USM's small-group naturalism in favor of some tastefully restrained but playful studiobound pot-stirring. As the record opens, the tone and rhythm are set by the sound of a magic marker writing. A minor key electric guitar, stately, not unBonham-ish drums, fuzz bass and a coed duet vocal fall in line one by one - like a tired Skrull regiment marching out to conquer, again. The tension builds but never quite subsides or climaxes. As the record progresses song to song, the sense of resigned dread intensifies. But this is not some sadsack downer bullshit. No it isn't. The assertive nature of the musical and vocal arrangements - there's funky bass, badass horn lines, whawazzat harmonizing, calming spurts of lovelyness, and jaw-dropping axe shredding scattered all over this thing - and the lyrics - vaguely gallows-humorous, mostly impressionistic meditations on war, sickness and isolation - are cut with a celebratory anxiousness.

There's been some talk wherever it is that people 'talk' these days, speculating that the current world reality may well inspire and inform some great musical statements like we saw in previous eras of turmoil. Of course, I'm not sure what's going to happen (major caveat: I haven't heard the new Morrissey album, the one with the cover where he's holding the baby yet), but I am prepared to go out on a limb and throw Mother of Curses on the pile with Blood Visions and Life...the Best Game In Town as an avatar of 21st century visionary rock and roll music.

Check for Mother of Curses at your local retailer, your preferred online source, or check with Chicago Independent Distribution.
Consumer note: the 12" vinyl l.p. contains a coupon for a free digital download of the album in mp3 or flac format. The download includes one song that is not on the cd or vinyl edition of the album.
at March 24, 2009 No comments:

We the people are outraged by Obama's cruel mockery of babies born with special needs! It is truly a disgrace that the President of the United States should so viciously and savagely attack handicapped persons. But don't take The Reglar Wiglar's word for it. Let the intelligent, well-thought out discourse by readers of the washingtonpost.com make up your mind for you. I think the President should leave the mocking of the mentally handicapped to the master, Larry the Cable Guy and stick to solving every major crisis facing this country within the week.
at March 20, 2009 1 comment: 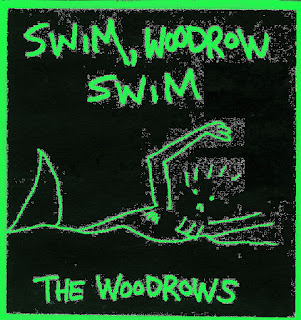 When you run out of dry land, you gotta swim, Woodrow, swim! The classic follow-up to Run Woodrow Run. Contains 16 explosive songs of desperation: "Backs to the Wall," "Fight or Flee," "Never Goin' Down" and more!

Woodrow Discography
at March 13, 2009 No comments:

Some thing(s) I (found) today

I was doing a little pre-spring cleaning today, and to dignify the occasion, I spun one of my all-time favorite albums: The Blasting Concept Vol. 2, featuring the silver-age roster of the mighty SST Records record label. Over the course of the 30-something minutes I found a few interesting items in my cabinets. There were those missing bird-shaped chip clips, as well as some regular-shape ones, a squeezy lime juice thing with some unidentifiable brown schmutz stuck to the side, and a mini bag of Cheetos Puffs. Most importantly, though, it occurred to me "Hey, wasn't there at some point supposed to be a Blasting Concept #3?" I pulled out a few vintage copies of SST classics and found the relevant catalog (tucked safely and responsibly within the sleeve to the tragicomic Minutemen epitaph Ballot Result) and realized, yes indeed, at one time, SST Records had officially indicated the existence of a "The Blasting Concept Vol. III", and offered same as available for purchase on double lp, cassette and, for twice the price, the now obsolete 'compact digital disc' format.

"Interesting", thought I, who, despite being a record-knower and -getter of legendary status, has not only not seen or heard this record, and though it had been offered for sale by SST Records, Inc. of Lawndale, CA, I do not recall a single mention of it anywhere other than in this catalog, dated Fall, 1987. Initial google search yields unsurprisingly dubious results, hurm. Led to believe that record was never made. Perhaps someone with connections would be able to at least scare up an intended track list?

Also, if anyone wants to be in a general SST tribute band called The Blasting Concept Vol. 3, leave a message in the comment section. I haven't touched a guitar for a few years, so I'm probably singing.

I've got a better idea