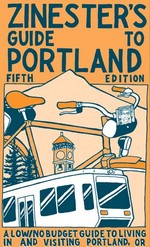 Never been to Portland—not Portland, Oregon, not Portland, Maine. I have watched five episodes of Portlandia, however. Does that count? Didn’t think so. If I ever do make it to the City of Roses (Portland, OR), I will surely be taking this guide with me. The Zinester’s Guide to Portland was put together by zinesters, but you certainly don’t need to be a zinester to use it. It’s written for the “low/no budget” type of traveler, which is a category I fall into. Museums, thrift stores, record and book shops, restaurants, bakeries, video stores, pizza joints, watering holes, coffee and tea shops, parks and bridges are all listed, laid out by geographic location and neighborhood and explained. It’s a Portlandicopia of useful information complete with maps and illustrations. It really makes me want to jump on the next Empire Builder out of Chicago for a slice of Portland's Sizzle Pie pizza—Chris Auman
Always read Reglar Wiglar!
at February 10, 2012