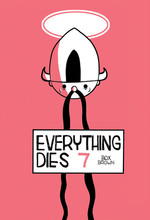 According to the Eridu genesis story, four gods (An, Enlil, Enki, and Nintur) got together and whipped up our planet and populated it with people who would soon become raucous and not much reverent. This pissed off Enlil in particular, who convinced the other three gods that them people gotta go. Thusly there was flooding and the peeps were destroyed save for one King Ziasudra who was advised by Enki to build an ark and find two animals of every kind and yada, yada yada—you know the rest.
Comics artist, Box Brown, tackles religious myths in his Everything Dies series. Originally slated for at least six issues, #7 is the latest with this creation story and flood myth found in old Sumerian texts (you may recognize it from your bible where some of the names have been changed and the four gods have been scaled down to one prime mover). Funny, succinct, simply rendered, and without any sort of religion (pro or con) heavy-handedness that tends to polarize readers. It’s a comic for Enki's sake!—Chris Auman [everythingdiescomic.com]
Always read Reglar Wiglar!
above ground comics box brown creation stories Eridu genesis story everything dies microcosm publishing sumerian texts