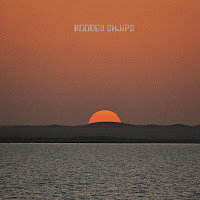 Fans of the San Fran band, Wooden Shjips, as well as fans of vinyl and 12” remixes, will be happy with this new Thrill Jockey release—as will fans of stuff that's limited edition, as well as fans of droning, spacey stoner music. The Remixes EP features three songs utilitzing the mixing and production talents of Andrew Weatherall, Sonic Boom (Pete Kember of Spacemen 3) and Kandodo (aka Simon Price of The Heads). In Weatherall’s hands, the first track “Crossing” (from last year's West LP) slows down the pace of the origninal, strips out the guitar, ups the bass and adds some synth to the mix, thus creating a more electronic edge than previously present. Pete Kember, who helped master the West album, took it upon his ownself to cook up "Wiking Stew (aka Red Krayola-ing)" as a mashup of tunes from that record. For "Ursus Maritimus (Last Bear’s Lament)" The Shjip’s Ripley Johnson laid down the main structure for Kandodo, who added various instrumentation to create a droning, twelve minute collage that is haunting in its stark chain-gang clang—like breaking rocks, not in the hot sun, but under a black moon. You feel me?—Jubson Jones [Wooden Shjips]
12 inch remix andrew weatherall kandodo sonic boom spacemen 3 Thrill Jockey Wooden Shjips