Reglar Wiglar Comic Review: Slap in the Face: My Obsession with G.G. Allin 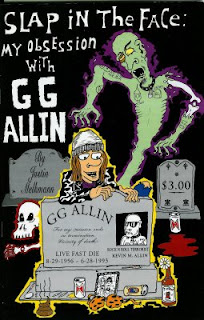 Comic artist (and guitarist in the punk rock band, WWIX), Justin Melkmann created this comic book to chronicle his relationship with scum rock icon G.G. Allin. Justin is a self-professed GG junkie who has been a fan of the man since the late 1980s. As an angry young 18 year old college freshman, Justin found that he identified more with GG than with the jocko-frat boys he was suddenly surrounded with. He eventually befriend GG after writing to him at the address listed on the back of GG's records. Justin suggested to his new pen pal that he film a documentary on his life. GG, receptive to the idea, introduced Justin to his brother and bandmate Merle, as well as the Allin parents and various member of GG's bands. The documentary project was abandoned after Justin learned that Todd Phillips was also making a doc. film on GG (Hated

). Justin switched gears and mediums and began producing a series of biographical comics on GG for the New York Waste. This eventually prompted a cease and desist order from the formerly cooperative Merle Allin. Surprised that Merle had a change of heart after he had condoned the documentary film idea, Melkmann shifted the focus of the comic away from GG's story, to his own story as an GG obsessed young punk. This comic is the fruit of that labor. The drawings are crude, by Justin's own admission, but the story is an interesting one, following the evolution of one person's obsession with a controversial subject matter. It also provides yet another small glimpse into what some call the genius (and others call the depravity) of the ultimate scum rocker, GG Allin, who died of a drug overdose in 1993. It also documents the path of Melkmann's life from a drunken twenty-something slacker who's pissing his life away with drink and drugs, to starting his own punk rock band and eventually landing a job at the fledgling Daily Show, where he is still employed as a segment producer and music director.