Zine Review: The Curious Case of the Communist Jell-O Box 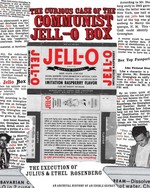 
During the trial of soon-to-be convicted (and executed) Soviet spies, Julius and Ethel Rosenberg, much credence was given to the fact that a Jell-O box, torn in half, was used as a way for the accused conspirators to recognize one another for clandestine meetings. If the two pieces fit, then ba-da-boom; fellow spy. The fact that all this went down during the Red Scare gives some credence to the opinion that this was merely a show trial and a thinly-veiled public relations campaign to assure the American public that the U.S. was on top of the Soviet espionage situation. The authors of this poster-sized zine suggest that "Leftists should be as unsure of the Rosenberg's guilt as they are sure that the trial was used to deploy public sentiment against the left." While the punishment may not have fit the crime, I don't see the benefit of being unsure of their guilt or innocence and this publication is not the best place to become educated on the subject.
Being the first, last and only convicted spies executed in U.S. history certainly suggests that hysteria and paranoia reigned supreme during 1950's Cold War America. Of this there is no question. The intent of this publication, I suppose, is to point out the absurdity of the prosecution (read the political Right) convicting the Rosenberg (read political Left, I guess) with such an iconic American product as Jell-0 brand gelatin. Like a good zine, it got me thinking, but further research will have to wait until I finish the rest of these gol' dern zine reviews.
Read more zine reviews!
Posted by reglarwiglar at 12:11 PM