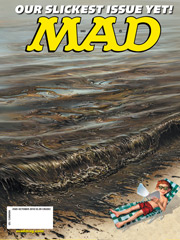 
MAD Magazine was a huge influence on me as a kid, and not just an influence, but an inspiration as well. It inspired me to make my very first magazine, Crazy, when I was ten years old. Of course I soon discovered that Crazy Magazine already existed in the form of an inferior MAD-style parody rag, but I hardly cared about copyright infringement at that point. I also remember buying a copy of MAD at a grocery store in the very early eighties when a former teacher of mine was in line ahead of me. When he saw what I was spending my 75¢ on he feigned disapproval. "That stuff will rot your brain," he said. That was exactly what he was supposed to say! As an adult and as an authority figure, that was the reaction MAD Magazine was intended to elicit. He knew it and was happy to play his part.
I've checked in with MAD Magazine over the years. I like to see what technological advances Spy vs. Spy have made. I even got a subscription a few years back. There have been a few changes in recent years of course. Being bought by Time Warner was a big one. With Time Warner's acquisition came full color and advertisements. The tone and content, however, has stayed much the same, relatively speaking, and some of the old gang of idiots are still representin'. Al Jaffee still provides the "Mad Fold-in" for the back cover and Sergio Aragonés is still filling in the margins with his drawings as well as contributing "A MAD look at Racial Profiling." Yep, MAD still manages to stick it to politicians, your teachers, your parents, your favorite celebrities and all the targets that still deserve it. "Teabagger Proof that Obama is a Terrorist/Socialist" is a good skewing of the current brand of right-wing hypocrisy. Hypocrisy being a problem shared by ALL political parties and politicians as MAD would be the first to point out. Of course the important gross out factor is still in play throughout the publication. Gotta appeal to your base I suppose.
I can only hope that MAD still influences kids today like it has for the past fifty-plus years. I don't know what Harvy Kurtzman would think about the current era but I'd like to think he wouldn't be too disgusted with how his magazine has evolved. I'm probably wrong about that though. What, me worry? Bah!
Read more maga/zine reviews!
Posted by reglarwiglar at 9:17 PM

Its been forever since I've looked in a Mad mag. I'll have to rectify that.

Hi, I Saw Your Link in Bing.com I Love Your Blogs Kindly See my Link Here a NWork At Home Jobs Work At Home here