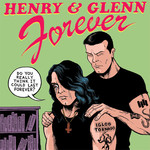 
"Henry from Black Flag!" yelled Danzig before "We Are 138" on the Misfits Evilive EP. Like a clarion call proclaiming their love . . . . er, uh, maybe not. Anyway, this book of mostly single panel comics is based on the comedic potential of an imagined relationship between these two classic punk front men.

So, regarding this book, you know, I asked myself, do these guys deserve this? I mean, they both started out in awesome bands (and yeah, I know Henry was in S.O.A., also great, before Black Flag, but I'm referring to Black Flag here) and in the interest of full disclosure (and just to brag!) I saw them both in 1983. And I saw the five piece Black Flag, with Dez on second guitar, which Joe Carducci considers the best line up. So, anyway, I have to admit, I was/am a big fan of these guys and their bands. However, as many musicians do, Henry and Glenn seemed to embark on a Sting-like career trajectory in which each new record they put out (Rollins Band, some Danzig stuff) had a diminished quality from the previous one. Eventually their classic material is almost eclipsed by their terrible new stuff. Also, Glenn probably lost the last shred of his sense of humor some time during Samhain. So, maybe Glenn deserves some ribbing. Henry sort of laid off the music in favor of his punk rock stand-up (uh . . . I mean 'spoken word') which I found to be funny about 50% of the time. Plus there was his talk show, his acting career, etc. So, maybe his actions don't automatically make him eligible for ridicule, but judging by his blurb on the cover of this book, I think he can take it.

So, I'm going to say maybe they both deserve a little bit of abuse, despite the fact that there are plenty of actually gay punk people who, you know, might take some offense here. But, you're probably wondering about the content of the book, and yeah, I guess I laughed at some of the gags. Mostly when they referenced Misfits or Black Flag lyrics. And I assumed this would be more narrative, but it's a loosely tied together series of panels concerning the cohabiting Glenn and Henry and their neighbors Hall and Oates (these guys did not need to be in here) with some non sequitur stuff thrown in. I don't know, I think it could have worked better as a story—Chris Butler
Read more Comic Reviews!
at December 18, 2010

sharmila said...
This comment has been removed by a blog administrator.
7:51 AM