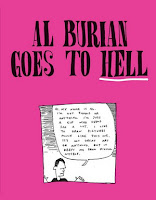 
According to Al Burian, and I'll take his word for it, Al Burian Goes to Hell is a 'bootleg' comic that was published without his knowledge or permission. This according to Al's website. You can read the post here. The comic is what Al calls "homework", drawn for a college class when he was twenty-two. From what I gather, it was for some sort of literature class, and has been dubbed "a loose comic interpretation of Dante's Inferno." Al, like Dante, takes his own journey to hell also with the guidance of Virgil. Along the way Al meets John Hinckley, Lee Harvey Oswald and a few friends of his who offer little guidance for Al in his journey. Al's version of hell appears to be a somewhat existential wandering between work and questioning the meaning of his pathetic, angst filled existence. I have no idea what the actual assignment was, but Al Burian Goes to Hell is no doubt a creative approach to the subject so I hope he got at an A or at the very least a B+—Chris Auman