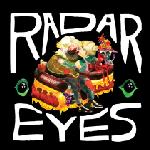 For some reason I expected some punky rock from Radar Eyes. That's not what they're about. This seven inch contains more mid-tempo, reverb-ladden, fare. Yeah, there's a bit of a Ponys vibe going on here. It's in the Chicago garage rock vein exemplified by the aforementioned band, especially on the a-side "Shakes". "Not You Again" has an 80s British vibe to it and I like it. The cover is cool, Mike Lopez. I would like to hear more Eyes in the future—Sonar Lips [Radar Eyes]

sharmila said…
Hi, I Saw Your Link in Bing.com I Love Your Blogs Kindly See my Link Here a NWork At Home Jobs Work At Home here
7:47 AM