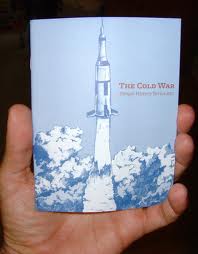 J. Gerlach (Microcosm)
J. Gerlach is back with another mini-history lesson, this time on the Cold War between the two Super Powers of the mid-to-late 20th Century: USA vs. USSR. The Cold War is quickly becoming a distant memory as we fry new fish in the 21st century. We like our wars a bit warmer now, but the War on Terror still plays the same games. We still prop up weaker allies whose interests we believe match our own while inadvertently sowing the seeds for future conflicts. This is now and that was then, however. In this current installment, Gerlach lays out all the major events and the players in his Cliff's Notes of History style. You got your revolutions, your arms races, your pacts, your treaties and agreements as well as espionage, air lifts, thaws, freezes, police actions, standoffs and stalemates and it all ended when Mr. Reagan asked Mr. Gorbachev to tear down that wall in Berlin. Not quite, but I've heard it spun that way. Let us also not forget that the Cold War produced some great movies too. No, I'm not talking about Dr. Strangelove and the Manchurian Candidate, I'm talking about Red Dawn and Spies Like Us!—Chris Auman
Read more reviews, and always...always read Reglar Wiglar!
Posted by reglarwiglar at 11:03 AM

Should have run a spell check on this here post. Stuff has been corrected. My apologies to Mr. Gorbachev in particular.