What's It All About, Phantom Works? 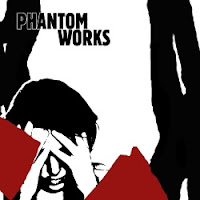 Each week we ask a band, musician or artist: What's it all about? What's the point? and Why go on? This week we ask precision noise trio, Phantom Works;

WHAT'S IT ALL ABOUT?
Our first LP is out for potential public consumption and we're damn pleased about that fact, so we're going to play a show at one of our favorite joints in town. This joint is called Quenchers. Two other rock-type bands will be preceding us on the bill: Rabid Rabbit (who have way too many bass players) and Three Cheers for One Dead Man, both from Chicago, just like Phantom Works (ahem).

WHAT'S THE POINT?
The LP is self-titled, but not because we're lazy. Someone at Sick Room Records thought it'd be a good idea to put it on their label. We'll take their assistance, but not because we're lazy. Hell, we even like a lot of the other bands on this label, but can't claim reciprocity. The album was recorded and mixed in the Phantom Works' basement, a.k.a. Da Shanks, which is on the border of Logan Square and Humboldt Park in Chicago. We used 1" 16-track tape for the recording and 1/4" 2-track tape for the mixing. We also used lots of microphones. Prove us wrong.

WHY GO ON?
We'll continue much like we've been, because that's what we do. Originally, there was a grand plan spelled out before our first practice, but in the end we realized that all the specs in that plan were just the way we tend to do things anyway. They didn't need to be verbalized, at least not to each other. We know what's right and we'll continue to maintain that correctness, but there will likely be more e-mail involved.
SUNDAY, 1/8/12, 9pm
Phantom Works, Rabid Rabbit, Three Cheers for One Dead Man, @ Quenchers
2400 W. Fullerton, 773-276-9730
Phantom Works quenchers rabid rabbit sick room records three cheers for one dead man