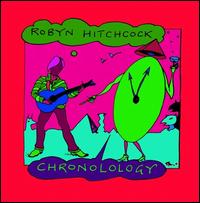 Robyn Hitchcock is one of those rare musicians that there just aren't enough of—or maybe there are. Maybe there shouldn't be too many like him. Maybe it would get a little too crowded in the pantheon of highly prolific artists with decades-spanning careers and reputations for producing consistently great work, even throwing in a classic album every five years or so. Maybe.
Chronology is Hitchcock’s current offering—no doubt just a placeholder while he continues work on some other musical project or another, with whatever group of musicians he's currently chosen to conspire with. The songs on this digital-only album display some of Hitchcock's best work, at least according to him—Hitchcock selected all sixteen tracks for the record—and I agree. With three songs coming from the Soft Boy's 1980 classic Underwater Moonlight, through his early solo recordings (including my fav "If You Were a Priest" from 1986's Element of Light) and work with the Egyptians and a reunited Soft Boys whose six minute "Mr. Kennedy" from 2002's Nextdoorland features an excellent double guitar solo that ranks right up there with the best of Television's Marquee Moon—proof positive that the boys did not get soft. Three more recent solo songs end the album including the beautiful "Full Moon in My Soul" from 2003's Spooked.
Chronology is as good an intro as any into the world of Robyn Hitchcock but it really barely scratches the surface of a remarkable career that shows no signs of slowing down—Manfred Lightbulbhead [Robyn Hitchcock]
Always read Reglar Wiglar!
Robyn Hitchcock Soft Boys The Egyptians Underwater Moonlight Venus 3 Yep Roc