DANCE TO THE DZIERZYNSKI BITZ 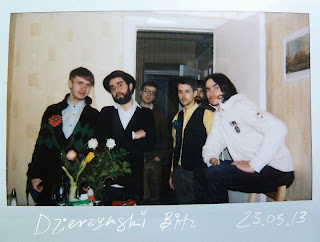 Dzierzynski Bitz (as Dzerzhinsky Bitz) is an orchestra of sorts. They can expand their numbers and their sound with musical connections from across the European continent. The Russian band currently calls Ukraine their home. The name, Dzierzynski Bitz, takes a playful stab at a Soviet icon who was sometimes known as Bloody Felix. You can use your imagination to figure out how Old Bloody earned his nickname. Bitz is simply Beat in English, but they're more Bronski Beat than English Beat and more Beatniks than Beatles. They posses a sound that is itself a playful take on Soviet era music. They mix it with new wave. They give it a post-punk attitude and invite the London Swing to engage in a romance with preWar Poland at their Soviet Bloc Party where cocktail jazz is being served in chilled glasses by very chill players. They can whip up a stir with their music that will get your heart fluttering while your feet begin to shuffle. 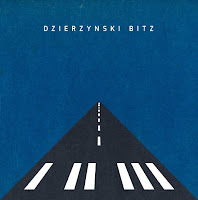 Dzerzhinsky Bitz first came together in 2007, although the current line-up has been together for just over 9 months. The players are Wojciech Dzierzynski (no relation?) who provides the vocals as well as percussion; Aleksei Rodzinski plays guitar with Max Paradis on keys; Wladislaw Kazimovicz plays the trumpet; Todor Stoiczkow the bass and Krzysztof Grehuta, drums. This core group enlisted the help of fifteen additional musicians to finish their debut album. I II III was released in 2012. The recording was begun in Russia, finished in Ukraine and mixed in London by engineer Joe Hirst (dEUS, Ian Brown, Yasmin). The result is an album possessing international cachet and a global flare. With contributions from their musical friends who supplied the tunes with everything from trumpets and tubas to dulcimers and clarinets, the album has a sweeping sound and a broad appeal to fans of electronic music, pop, rock, even modern jazz. The album cover, made in Poland, adds further to the aura of a journey being embarked upon. It looks, feels and sounds like something that could have been conceived of on the Autobahn while dreaming of the Trans-European Express. It invites you to take a ride and you should.

Looking to the romance of days past is fine for creating atmosphere, but Dzierzynski Bitz are forward thinking always. They have their eyes on the road ahead. They want to bring the beat to the rest of Europe, beyond east and west. North and south as well. They've been as far as Poland but surely they can broaden their horizons further. The English-speaking world doesn't need to shy away from lyrics sung in another language. The international language of music speaks to you first, and besides, you know what these songs are about. You will if you listen.