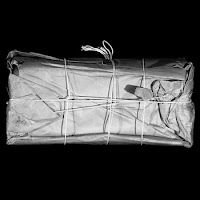 Named for the bleak as fuck German death flick in which a violent suicide or murder is depicted for each day of the ever-lovin' week, Der Todesking (Death King), let you know right up front just what kind of creeped out aesthetic they’re into. It’s horror-core punk rock with a real bummer edge. The Real Bomb cassette is nine songs of dirty grit, grime, knives, fire and flame. With screaming, growling vocals and nasty unpolished noise, D.T. get right up in your face with it. There's a nod to seminal SoCal hardcore band Black Flag in  “Playing with Knives” which has its own take on “Six Pack”:

And “Arson” gives similar props to The Descendents' own “Suburban Home” and their desire to (not) be stereotyped and classified, thank you very much. Scary like punk rock usta was and should be again—J. Germ [Der Todesking]
cassette cosgrove audio death king der todesking kansas city punk kc real bomb tapes