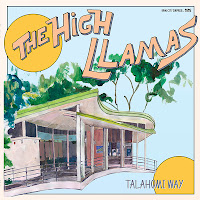 
It’s interesting that we should receive this album the same week as Heidecker & Wood's Starting from Nowhere. They’re very similar in their approach to pop music. The High Llamas have been at it for a lot longer of course and it’s hard to determine exactly where Heidecker & Wood are coming from. The Llamas, led by founder Sean O'Hagan, have been at it since 1992 releasing nine records in that near twenty year span. I have not heard any of the band's preceding eight efforts, nor am I familiar with O'Hagan's previous bands Fatima Mansions or Microdisney. I can only assume that he, like many artists with any sort of career longevity, started at one point and arrived at another. Beach Boy comparisons have been a theme throughout the Llama's career and O'Hagan has professed a love of Burt Bacharach, so the lush and orchestrated music on Talahomi Way is no surprise. And is that a harp I hear? Probably. I can picture this record playing softly at a Yonkers as people shop for shoes. That's not to say that it's cheesy or the work of hacks. Quite contrary, it's very well crafted. Every note seems to have been meticulously plotted and every arrangement painstakingly planned. Lead off track "Berry Adams" is the standout tune for me, although "To the Abbey" is its rival with a catchy, breezy hook. If there's one single thing that The Llamas do especially well is create music that has a timeless quality to it, yet stills seems very specific to a certain time—PC Jones
Posted by reglarwiglar at 10:52 PM

sharmila said...
This comment has been removed by a blog administrator.
4:25 AM