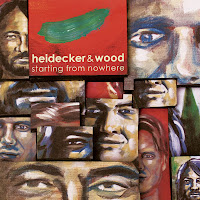 Let's get this out of the way first: Tim Heidecker is the co-creator of Adult Swim's Tim and Eric Awesome Show, Great Job! and Davin Wood is a composer on that show as well. If you're familiar with the Awesome Show then it's really hard to listen to record as a serious musical effort. Watching the Awesome Show is like watching someone get punked over and over again and that someone is you. So, how do you take a song like "Cross Country Skiing" seriously given the background of these guys? It ain't easy. It's hard to find that thin line if you're looking for it. For example, "Weatherman" was a song that started out as a composition for the show, but was expanded upon by the duo and here it is on this LP. Keeping the satiric and ironic nature of the two separate in your brain proves difficult and maybe even pointless, especially considering songs like "The Grandest Canyon," "Wedding Song," and "Cross Country Skiing". Just where is that thin line between irony and sincerity? Remember after 9/11 when they told us this single tragic event would be the end of irony as we knew it (and action movies, and really tall buildings, etc.)? Well, Heidecker and Wood may truly single that end. Maybe the jokes on me. Maybe there is no joke. In fact, there probably isn't. This may simply be the duo's chance to unleash their 70s AM radio influences on a built-in audience. The end result is eleven songs and one bonus track of breezy yacht rock. Fleetwood Mac, Steely Dan, even Elvis Costello get thrown into the slow-jam stew, but I can't help feeling like I just got punked when I listen to this record. You can come out now, Kutcher!—PC Jones
Adult Swim Davin Wood Great Job Tim and Eric Awesome Show Tim Heidecker yacht rock

sharmila said…
This comment has been removed by a blog administrator.
4:24 AM