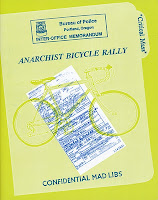 Thanks to the Freedom of Information Act, zinemaker, Joe Biel, was able to obtain Portland Police documents detailing that department's efforts to monitor and contain (and eventually help end) Portland's Critical Mass movement. While some of the documents are merely bureaucratic interoffice memos, it's an interesting glimpse into the inner workings of the police. The charge leveled at the cops in this instance is that of spying—the department used undercover officers to infiltrate rally planning meetings to gather information on these supposed "Anarchist" cyclists. While that certainly seems like overkill, it is apparently entirely legal. While this zine highlights the heavy handedness of the police department's overreaction, there's the implication (which is more than implied but alleged in the accompanying press sheet) that Portland Critical Mass was "brutally torn down" by the PPD. This would seem to suggest that the Portland Police Department is something akin to the KGB or the Stasi or their contemporaries in modern day dictatorships. Maybe this is a result of what's going on in the world in 2011, but I personally was not persuaded that the police actions rose to the level of brutality. I'm sure Libyans would love these sorts of problems, but I don't live in Libya and I don't live in Portland and I've got my own CPD to watch out for. It should be mentioned that some of the documents featured in this zine are presented in Mad Lib form in an effort to get people to start reading by having a little fun with the subject, but overall I found that less interesting than the actual memos themselves.—Chris Auman
Read more zine reviews!
anarchists bike rally bikes cantankerous titles Critical Mass cycling Portland