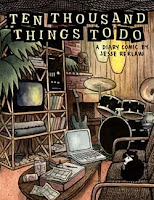 TTTTD is the year-long, illustrated journal of artist, Jesse Reklaw. Originally appearing as a series of mini-comics, the diary details (in four panel comic form) Jesse's daily life living and working as an artist in Portland, Oregon. Self-doubt, bouts of depression and booze, creative spurts, good times with friends, playing music and also mundane everyday activities all get recorded, sometimes with the help of guest artists. Jesse tracks his sleep schedule, as well as his coffee and alcohol consumption which he is then able to use as a tool to gauge his mood and behavior which is useful for a little self diagonosis. (Read more about that in our interview with Jesse.) TTTTD is an ambitious project and an interesting glimpse into the creative life—Chris Auman

Posted by reglarwiglar at 11:00 AM