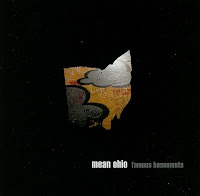 Famous Basements is the new eight song disc from Chicago's, Mean Ohio. These transplants from "The Mean State" (I'm sorry but that's the Ohio State Motto, I didn't make it up) are a four piece combo that specialize in groovy rock and pop numbers. With two singer/guitarists fronting the band, vocal duties get traded off from song to song resulting in a variety of styles shifts. This change-up creates a nice contrast of moods and rhythms. The album kicks off with the poppy harmonies of "All Won't Ever Die," (which also features saxophone and a cheerleader) followed by the '60s hints of psychedelia on "Distorted Reflections," Those two beginning tracks are likewise bookended by the funky (if I may use that word) "No Need for Alarm" and the spoken-sung build-up of "Black Box Syndrome." Mean Ohio aren't afraid to shift gears or change horses midstream and while that could potentially be a distraction to the listener, the songs here are all strong enough to blend and compliment each other. Know what I mean, Ohio?--Buzzard Brown
Posted by reglarwiglar at 11:45 AM