Jayne Wayne's Press Release Round Up

Fantagraphic Books has announced the 2014 publication of Wilfred Santiago's graphic novel, Bull on Parade which portrays the life and times of living legend, Michael Jordan. In the 1990s Jordon led the Chicago Bulls to a "Nonconsecutive Six-peat" (try and trademark that one Pat Riley!) and is perhaps the greatest b. baller the world has yet to produce, and who's a better super hero subject than this real life superstar baller and hawker of fine cotton briefs? No one. Not Lebron what's-his-name or Kobe who-the-hell-cares-anyway, that's for sure.

Speaking of dropping, a little sooner to drop in July of 2103, is a full fledged novel also from Fantagraphic. In Case We Die is the debut novel by Seattle writer, musician and scene mainstay, Danny Bland (formerly of The Dwarves, Cat Butt, Best Kissers In the World, etc). Even though it's not a graphic novel (unusual for Fantagraphics), the presumably semi-autobiographical book promises to be plenty graphic as it follows the lives of two junkies in 1990's Seattle. The novel will also be accompanied by an audio book from Seattle's Local638Records that will feature a whole cat-butt-load of artists and musicians who lend their voices to bring chapters from the book to gritty life. 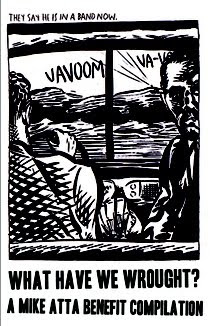 Hold the Onions (and the Meatmen)!

Burger Records, the philanthropic label known for its charitable benefit releases, has another charitable benefit jam out now. What Have We Wrought? is a cassette-only release of 1,000 numbered copies that will help Middle Class guitarist and founder Mike Atta battle his medical bills as a result of his battle with cancer. It's only eight freaking bucks and it is so super packed with punk rock royalty (Germs, Dicks, Black Flag, Adolescents, Mike Watt) that you may vomit with joy like it's 1981 all over again. Speaking of '81, this tape also features the unreleased Middle Class tune, "Body and Soul," recorded in 1981.

Check out the Burger Records website for a full track listing and to check the progress on their ambitious "Tape a Day" January release schedule.
Posted by reglarwiglar at 2:51 PM