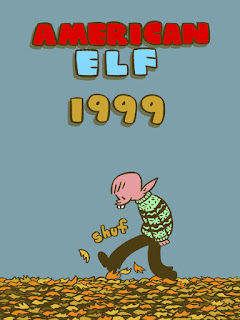 James Kochalka began drawing his comics diary American Elf in 1998 while on a plane to the San Diego Comic Con. Almost fifteen years later, the comic is still kicking. It's an on-line serial now, of course, and our Superstar has kids and considerably less hair. Keeping in step with the digitally-delivered theme of the universe these days, Top Shelf Productions has made Am Elf available in digital editions. So far, the years 1999 to 2001 have been released with undoubtedly more on the way. Beginning at the beginning, 1999 sets the template with James depicting his every day life in four panel strips. Whether talking about his "peenie" or describing the silly scene of a squirrel carrying a bandana up a tree, Kochalka uses the four panel format to distill the basic feelings of the day through small, seemingly mundane events. The take away from these snippets of everyday life? Don't sweat the small stuff, enjoy them instead—Chris Auman

Posted by reglarwiglar at 3:41 PM