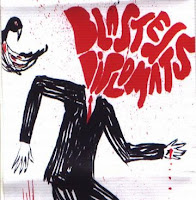 There's something instantly familiar about the Blasted Diplomats, which makes sense—all four members are long-time record store employees. Osmosis alone would mean these guys have absorbed thousands of hours of rock music and peeped plenty of album art. So at their heart, the Blast Mats are a product of that music overload. What comes through most evidently on this self-titled debut cassette is their affinity for the indie guitar rock of the early to mid 1990s and bands like Grifters, Archers of Loaf and Gaunt. The tape is comprised of ten songs—a mix of tracks recorded both live and in the studio. The studio tracks are pretty raw and stripped down while the live tracks show the Blast Mats working their boozy charm on a party crowd thus reinforcing the unpretentious attitude of the studio songs. Given its look to the previous decade for inspiration it's only fitting then that a cassette is the chosen format for this release. Fine by me, time to get blasted—P.C. Jones
Read more record reviews!
90s indie rock Archers of Loaf Blasted Diplomats Chicago music Grifters plustapes