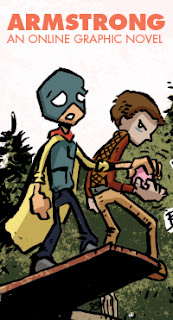 ARMSTRONG
An On-line Graphic Novel by David Halvorson
Comics artist David Halvorson has created a three-part (so far) on-line graphic novel in which pint-sized super heroes battle evil during recess at Armstrong Elementary School. Fourth grade characters like Clinton, (the drawling cowboy sheriff), Scrap and Yoshi (super heroes in their own right) wage war against cootie plagues, schoolyard zombies and treasure hungry pirates. In addition to being a talented artist, Halvorson is a good writer and storyteller. His fantastical playground tales flow well and the writing is clever and quite funny. Creating a comic specifically for the web allows for Halvorson to execute some cool visual tricks on the page. Like their print counterparts, on-line comics are still read from top to bottom, left to right, but because you’re scrolling down, the action is hidden until you get to it. The impulse to sneak a peak at the panels of facing pages has been removed in this format. This allows the artist to create an almost cinematic visual effect, like the opening of the third chapter "Rise of The Wreckyard." The top of the page starts with a few descending word bubbles set against a blue sky. It pans down to a blazing, playground pirate ship where a fierce battle is being fought on deck. It's a nice contrast that would be difficult to pull off in an old school comic. The tales of Armstrong Elementary are still unfolding with “The Ballad of Sheriff Davenport" up next. Bookmark it—Chris Auman [ Armstrong]
Always read Reglar Wiglar!
Posted by reglarwiglar at 12:27 PM