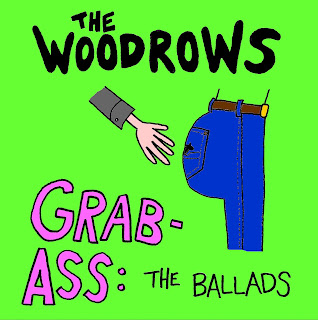 Before there was such a thing as "Trump/Pence 2016", there were the equally vile Woodrows. The thing about these boys though, they NEVER got a way with it, because they weren't rich, they weren't famous, and they sure as hell ain't good looking -- but, neither is The Donald!

No one ever accused the Woodrows of being sensitive (at least not to their faces), but the lads do have a softer side. That's evident as shit on this twenty-two track album of classic Woodrow love tunes. Includes the touching "Won't You Touch it One More Time?," the soulful "Love Stick" and the heartbreaking stench of "Dutch Oven". There won't be a dry eye left in your head after you sit through this thirteen minute tour de force. (That's French, ya'll!)

Visit the Woodrows' Discography Page on reglarwiglar.com for more great albums!
Posted by reglarwiglar at 2:32 PM