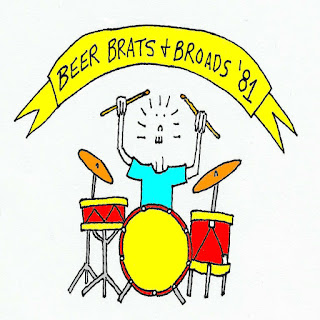 That's bräts as in brätwursts, FYI. The Woodrows' second album of 1981 was the live LP, Beer, Bräts & Broads. This would be the first document of what would become a decades-long run of annual drunken sacrilege and bacchanalian misadventure. The Woodrows' set ended in typical fashion with the band simultaneously passing out after a blistering, chaotic fifteen minute set, but if the discerning Woodrows fan listens closely they can hear such Woodrow faves as, "Ricky's Got a Boner", "Weed Bag", and "Piss Pants". At least we think. Who knows?

Posted by reglarwiglar at 5:00 PM