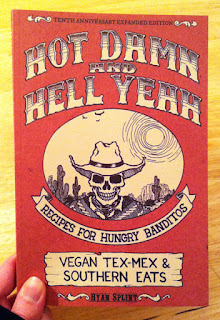 When Ryan Splint moved to the Land Down Under, or as they call it in the American South, the Land Down Yonder, he soon found himself missing the Tex Mex cuisine of his youth. His Aussie friends encouraged him to write a cookbook chock full of vegan versions of these Southern staples. And so he did. Hot Damn and Hell Yeah is the 10th Anniversary expanded edition of that effort. It contains all sorts of delicious recipes made 100% free of animal products. From "corndawgs" to "chili con non-carne," ya'll vegan doggies can cook up these vittles yourselves on prairies, patches, vegetable ranches or around any campfire you find yourself in front of.

The recipes are purposefully straightforward and easy to concoct. While a vegan diet is certainly healthy (if done correctly), this book does not aspire to be a healthy cookbook per se. The focus is on taste first and foremost. These recipes sure do look pretty goldang good and the ingredients should be easy to rustle up at your local, healthy, more whole foodier stores—Chris Auman