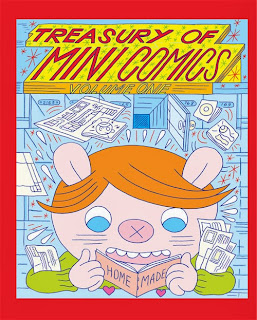 
This is the second collection of mini comics compiled by editor Michael Dowers and published by Fantagraphics Books. Like its predecessor, Newave! Underground Mini Comix of the 1980s, Treasury of Mini Comics is filled to bursting with dozens of the best mini comics ever produced. It was Dowers' goal with Newave! to demonstrate the direct influence of 60s underground comics on the artists behind the mini explosion of the 1980s. With the Treasury of Mini Comics volumes, Dower continues to demonstrate this progression, bringing the series from 1969 up to present day. Also like the book's predecessor, Treasury features interviews with these comics creators about the what, when, where and why of their work in minis.

While there's still room for absurd story lines and subject matter, the work presented in this volume seems to be more focused and, dare it be said, sophisticated than in the previous volume. This is perhaps due to the growing respect minis have gained despite their small stature (typically four and a quarter by five and a half inches). The mini has enjoyed recognition and respect as a legitimate comics format rather than just a cheap way to self publish (which it certainly still is). Towards that end, there has been a little help from graphics editing software in cleaning up images and of course copier technology has vastly improved in the last forty years as well.

Some of the artists featured in this volume include Roberta Gregory, John Porcellino, Noah Van Sciver, Andy Singer, Blair Wilson, Matt Feazell, Jim Blanchard and Carrie McNinch, to name but a few. Bound in an arresting, fire engine red hardcover, this squat and sturdy book will have appeal to fans of underground comics, mini-sized or otherwise. If you're a complete-ist (so rare in comic book fans), be sure to save enough room on your shelf for Volume Two—Chris Auman

This review was originally published on Sound on Sight.
at December 17, 2013