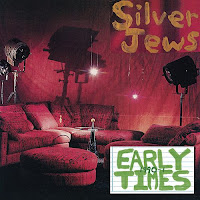 This is for the hardcore Silver Jews fan out there 'cause these fourteen tracks take the term lo-fi and grinds it down a fi or two. The songs on this compilation come courtesy of the band's Dime Map of the Reef 7" and the Arizona Record 12" and even by early 90s (and Silver Jews!) standards this is some pretty rough stuff, but the album ain’t called Early Times ‘cause of the whisky they were drinkin'. Well, maybe it is. Whatever the quality of sound or total lack thereof, Early Times is simply a testament to the early, early stages of a group of hardworking “slackers” who probably drank too much but cared enough about music to not sweat the small stuff. Form a band now and learn to play later is the best model for good music anyway. All that said, music buffs and Silver Jews fans may rejoice at the release of this historic document, but repeated listening? Not so much—Dove Burman