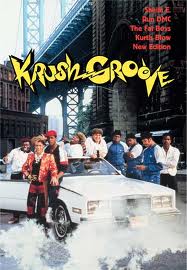 Let me lay down a quick plot summary for you: It’s New York in the hip hop '80s and rap is just starting to gain some respect outside of the 'hood. This is evident by the sudden success of real-life rappers RUN-DMC, Kurtis Blow and Dr. Jeckyll and Mr. Hyde—all artists on the independent Krush Groove record label run by Russell Walker. Krush Groove doesn't have the cash to keep up with demand, so Russell has to borrow money from a "bad dude"; some douche from Galaxy Records has a hard-on for the acts on Walker's fledgling label and offers RUN a chance to get paid; RUN leaves Russ for the Galaxy deal; Russ gets a beat down from thugs sent by the loan shark; RUN likes Sheila E.  who plays Prince-sounding purple soul but crosses over to rap—oh, and she likes Russ and Russ likes her and they "do it" in a really cheesy love scene with candles—and it’s all a big mess until it  isn't anymore.
Sure, it's a bad movie. It's not well-written and the plot was tired 25 years ago when the movie came out, but it's still entertaining in a raploitation sort of way. Low lights include a performance by New Edition looking as ugly as they ever were and the acting is pretty bad across the board. Most characters play themselves and not terribly well. Russell Simmons was wise to take only a small role as a club promoter.
It's not all bad though, just mostly. Tolerable are The Fat Boys who manage to be somewhat charming in a comedic subplot that features an "all-you-can-eat" scene at an Sbarro's. The Beastie Boys get about a minute of camera time to perform "She's On It" and a teenaged LL Cool J. wows the boys at Krush Groove with an impromptu audition of "I Can't Live Without My Radio" after barging into their offices with his boombox.
And of course, it's all loosely based on the true life story of Rick Rubin's and Russell Simmons' Def Jam label. The high point of it all, however, is the final scene at Disco Fever where Rick Rubin can be seen DJing in the background while wearing a Hüsker Dü t-shirt which gives the entire film credibility in its final seconds—Chris Auman