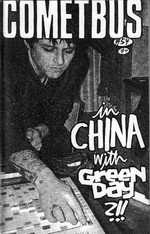 Haven’t read Cometbus in awhile. I like the switch to type even though Aaron does have very legible handwriting. It's just much easier on these old eyeballs. This issue sees Aaron on tour with longtime pals Green Day. It seems that his relationship with one of the biggest bands in the world has come full circle from the Berkeley days of the early 90s. This gives Aarron pause for thought as he contemplates the way his relationship with the band has evolved. There’s some self-reflection on the views of Aaron's younger self, which may have been at tad rigid in retrospect. He also remembers that Green Day—a band that were decried as sellouts to the Berkeley punk scene—were never accepted by that scene in the first place. At the end of the day, and at the end of his brief stint on the tour, Aaron has a new found respect for his old friends. These are all revelations Aaron has as he wanders city streets in Thailand, Japan and Singapore. I was never a big Green Day fan myself, but the longevity of their career forces me to give them props, especially considering all the cookie-cutter pop punk bands they left in their wake. Aaron exposes Green Day for who they really are: regular people that other regular people put up on pedestals.
Read more gol' dang Zine Reviews.
Posted by reglarwiglar at 12:18 PM