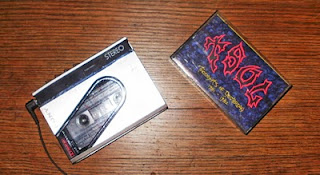 Few 80s bands went through as many stylistic somersaults as the SoCal band T.S.O.L. Melodic hardcore, gothic guitar rock, hard rock and metal where all tackled with a fluctuating line-up and a loyal fan base. By the time this reissue came out in 1988, The True Sounds of Liberty were dressing like the rest of the L.A. glam poseurs who were starting to chart at that time. Admittedly, T.S.O.L. had a much harder sound than your Poisons and your Cinderellas. This cassette features the band's first EP, their first 7" and an alternate take on "Peace thru Power" from 1981's Dance with Me LP. This EP contains the best of the fast punk rock model with "Abolish Government" "No Way Out" and "World War III" being the archetypes of the genre. To paraphrase singer Jack Greggors/Ladoga/Grisham, President Reagan can still shove it--Joey Germ

sharmila said…
Hi, I Saw Your Link in Bing.com I Love Your Blogs Kindly See my Link Here a NWork At Home Jobs Work At Home here
9:37 AM