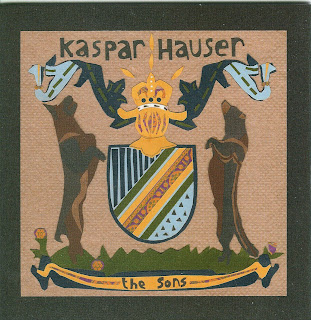 Kaspar Hauser's been kicking the tin can gong around this town for a decade now, recording and releasing a variety of material on small local labels. Borrowing the name from a Warner Herzog film, The Enigma of Kaspar Hauser (pretentious much?), singer/songwriter and Ohio native, Tom Comerford formed the band in 1999 in Iowa City, Iowa. Shortly thereafter, Comerford moved to Chicago where the band has employed a revolving line-up of members who have delighted audiences from Duluth, Minnesota to the Cleveland Flats.
Their latest offering to the world is a disc titled The Sons. Like a Midwestern REM fronted by Neil Young (sideburns included) Comferford and company touch on the more obvious elements of blues-inspired rock but also add a rootsy element and a haunting Americana feel. "Prodigal Son" and "MacBeth II (In the Morning)" are two standout tracks on this nine song LP. An unexpected cover of a Kinks classic, "See My Friends," also makes an appearance albeit with an American make-over in the form of pedal steel guitar. The track "Baby Vampire" seems to make light of infantile vampirism which is not a subject I take lightly as I have a niece who suffers from it, however, KH seem to just skirt the line of good taste without stumbling over it.
RoosterCow Records owner, Dick Cockman famously said, after reportedly being duped into signing the band to a one-off seven inch single in 2003: "I've seen sideburns with more talent! That's right, individual patches of facial hair with more talent than this kid." Comerford and crew have certainly proved Mr. Cockman wrong again with The Sons.
Americana infantile vampirism Kaspar Hauser