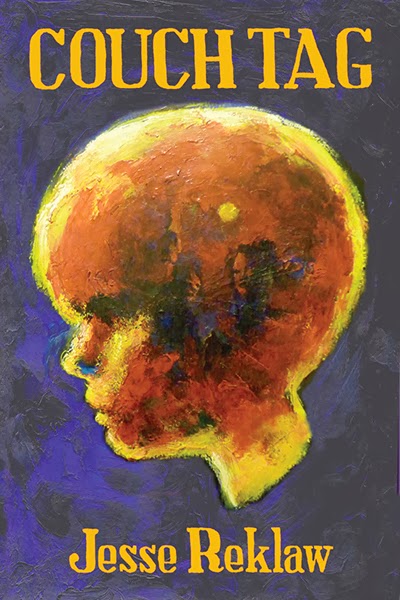 Couch Tag is a new graphic memoir from the artist Jesse Reklaw, his first. While this may be Jesse's debut in this format, this is hardly his first contribution to the world of comics. Jesse has been drawing and self-publishing comics for several decades. His strip, Slow Wave, in which he translated reader-submitted dreams into surreal comic strips has been published widely in both print and on the web and his daily comics diary, Ten Thousand Things To Do was published by Microcosm in 2010.

Couch Tag  relates the story of the author's childhood growing up in typical dysfunctional fashion. Jesse’s nuclear family consists of his sister, himself and his hippie parents. Although the word hippie can imply, perhaps some sort of a political leaning or communal way of life, for Jesse's family, at least for his father, it seems to be more about being shiftless. Shiftless, yet strict. Jesse’s father is portrayed as a heavy drinker, a pot smoker and a bit of a dick—not a sympathetic figure. His mother goes along to get along until she doesn't anymore and the two split up. Jesse floats around or above it all, trying to figure out his place in the world.

Couch Tag is a game that Jesse and his childhood pals made up where the floor is pretended to be covered in hot lava, or some such deadly substance, and one must navigate their way around the room stepping only on furniture.  The book is broken up into five separate sections that all deal with Jesse’s past. In "Thirteen Cats" (featured in The Best American Comics), Jesse recounts some of the furry past friends of the family. The cats, like the family's homes, seem to be abandoned and changed fairly easily and in quick succession. "Toys I Loved" features recollections of stuffed animals, security blankets and a Stretch Armstrong doll—a  goo-filled toy from the '70s that could be stretched to almost impossible lengths. "The Fred Robinson Story" is the entertaining tale of two creative teenagers who decide to focus their energies on lightly torturing a random citizen named Fred Robinson. It’s the harmless prank phone call taken to an extreme level with comics, songs (and one would almost expect a musical adaptation) all devoted to the speculated life of a stranger named Fred. "The Stacked Deck," is told through the explanation or observation of various card games that Jesse remembers from his childhood. "Lessoned," is when things start going off the rails. The artwork gets noticeably more chaotic. The paintings and white out of this last chapter depict a whirlwind of confusion, depression and drug experimentation as Jesse attempts to come to terms with his inner demons through an alphabetical list of past trauma, grievances and lessons learned.

The times weren’t all bad, however, and these nostalgic stories are lined with happy times here and there, even as friends, houses and cats change, and there are sure to be many more chapters to come—Chris Auman

Read the Reglar Wiglar interview with Jesse Reklaw.
at March 13, 2014 No comments: