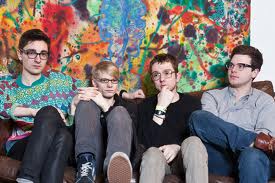 
Pronounced alt-j (or as Muggsy pronounces it option-j). The real question is, how does Muggsy feel about a new arty British buzz band that damn near has an emoticon for a name? Shift : shift (
at March 29, 2013 No comments:

Song of the Day: Anamanaguchi, "Planet"

Song of the Day: RocketNumberNine, "Rotunda" 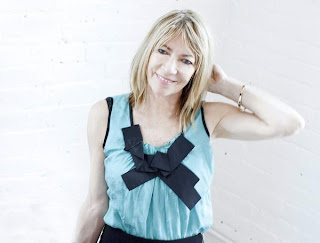 
Muggsy finds it interesting that in a post-Sonic Youth/Kim Gordon-is-married- to-Thurston Moore world, these two exes will be performing in the same town within a few days of each other. It's interesting, that's all. Gordon performs with the Chicago experimental duo named White/Light (although Muggsy thinks the band name Lemos & Clark would have been a good one too).

You can read this Kim Gordon interview in the Chicago Tribune if you like.

Thank You For Your Relentless Pursuit of Excellence!: Reglar Wiglar Greeting Cards 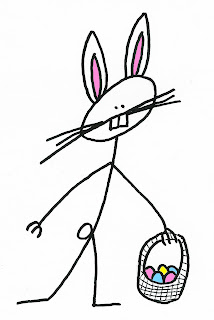 Thank You For Your Relentless Pursuit of Excellence!: Reglar Wiglar Greeting Cards: Buy this card and send it to the dumb bunny in your life! Sure, it's a little mean, but aren't you the cruelest to the one...
at March 22, 2013 No comments:

Music Review: Iceage, You're Nothing 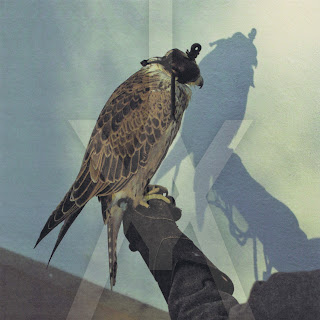 
Iceage is not from the U.S. or even the U.K., although they sound at times like Wire crossed with Hüsker Dü or the band Ian Curtis and company would have formed after seeing Black Flag instead of the Sex Pistols. They are, depending on your preferred tag, a Danish "post-hardcore", "post-emo" or "post-punk" band. No "post" modifier is really required, however. Everything is "post" these days and Iceage travels on trails blazed decades before. The band's use of right-wing imagery and themes is certainly nothing new and hardly gained much traction as far as controversies go. The fact that a Danish post-everything band such as this can land on Matador only makes sense in 2013. In 2003, Iceage would likely not have risen above the underground VFW Hall, Book Your Own Fucking Life scene in this country. That's not to say they don't deserve to be on a higher profile label like Matador. They do, much the same as countless bands before them deserved, but never acheived that status. The other, allegedly noteworthy, thing about Iceage is their relatively young age. They were teenagers when they started the group. Teenagers playing punk rock? Pretty radical. No, they were and still are exactly the age you'd expect of a band that attacks it's music with violent, world-ending urgency.

None of the above makes You're Nothing—the band's sophomore full-length after 2010's New Brigade LP— any less worthy of loud, repeated plays. The album's opener "Ecstacy" is a washed out mess of guitars that sounds like snotty Brits taking the piss on an 80s SoCal hardcore band. It’s got a fast part and a faster part where the drums take off and the guitars seem so stupified and stuck in place, they can’t give chase. "Coalition" is all buzz saw guitars and angered alienation with a shouted one-line chorus of "Excess". "Interlude" begins with the sound of a distant train. There’s something sinister about it. It builds with the march of a snare drum. Perhaps this is one of those ultra right-wing themes that needs to be carefully monitored? Or not. "In Haze" has singer, Elias Bender Ronnefelt, in top punk vocal form (you one can almost see the spit flying into the mic) as the math rock guitars duel it out behind him. "Morals," the longest track at three minutes and twenty seconds, features a few piano chords over a guitar drone that could pass for the Strokes on heavy doses of Robotussin before it ascends into the chorus ending with those martial sounding snares again. "Everything Drifts" makes good use of a chunky Chuck Dukowksi bassline and "Rodfaestet" is a punk rock sprint sung in Dutch.

Iceage may not be the new age of anything, but they do justice to a long tradition of abrasive music that also manages to be both intelligent and tuneful—Chris Auman
at March 18, 2013 No comments: 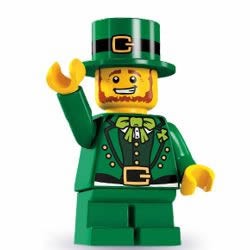 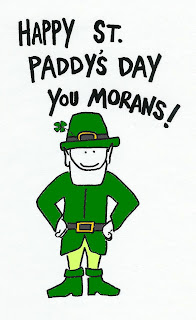 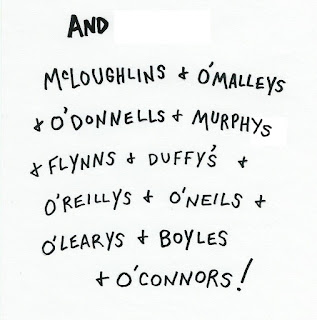 Yes, you LepreCAN buy this card and send it to your favorite Moran... or O'Donnell or Boyle or McDonald!
at March 12, 2013 No comments: 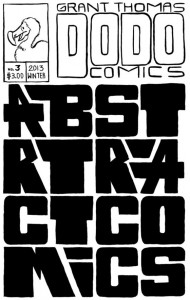 
Seeing as how there is not a single written word in this new issue of Grant Thomas’ Dodo Comics, I am at a loss as to what to say about it. I feel like a real dodo. (Why are dodo’s considered dumb? Is it because they got themselves extinct? That was hardly their fault, I would think). At any rate, this issue is titled "Abstract Comics" and it features a series of six comics in the form of poetry. How does that work exactly? Well, I expected certain panels to repeat and follow the comic equivalent of an a-b-a-b rhyme scheme but I detect no such pattern. The fact that these visual sonnets do not follow the same structure as a written poem makes them no less poetic. The black and white shades and lines in the panels follow the flow dictated by Grant in a free form, stream of conscious style, like waves or freed leaves or blowing feathers. It's a simple approach, utilizing a simple technique to create a simple visual style—Chris Auman
at March 12, 2013 No comments: 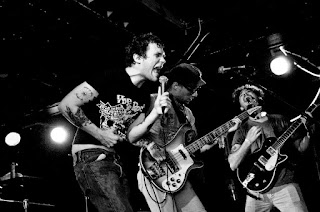 Occasionally, Reglar Wiglar Magazine asks a band, artist or musician: What’s it all about? What's the point and why go on? This week we ask Chicago skin cats, Flesh Panthers:


What's it all about?

This is the second year we have hosted a St. Paddy's Day celebration. Last year was in our practice space/living room and Flesh Panthers dressed in drag. This year it's all about coming down to the Burlington Bar (3425 W Fullerton) March 16th, Chicago, IL. Will we be in drag this year? Who knows.

Flesh Panthers will also be releasing a new EP via Exxotic Aquatic tapes. It's got four brand new songs of feed back ridden schitzoid-garage-punk. You can pre-order it now at http://fleshpanthers.bandcamp.com/, but the best way to get it is to come to a show.

Why go on?
Lots of regional and Chicago dates planned for spring/summer 2013. Including May 18th at Mickey's Tavern! (Madison) 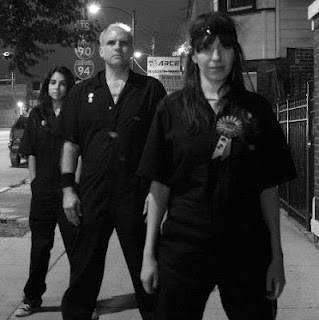 Occasionally, Reglar Wiglar Magazine asks a band, artist or musician: What’s it all about? What's the point and why go on? This week we ask wood prudes, Puritan Pine:

What it's all about is RATCHED CORE, a new sound guaranteed to momentarily entrance rock critics, hipsters and the blogosphere. It has something to do with girl groups, nineties rock and a dash of dissonance from the SST/Teen Beat/Homestead realm. Puritan Pine is the sole source, and we'll be opening this scene up on Friday, March 8 at Township in the fashionably shabby Logan Square neighborhood in Chicago. Also on the bill are Orions and Sentinels. Put down your Pabst and tater tots and get RATCHED.

The point is... well, we already made our point a few months back, when we packed the notorious Mutiny Corporation in Chicago and walked off with a big stack of cash from Ed the proprietor. Nobody got stabbed and we got to drink our Old Style pitchers right there on the street. Utterly ratched. What comes after that? R. Kelley can have Pitchfork for all we care.

We go on because we have an EP to push: BOOMERANG. It'll be done as soon as we get it all mastered right. And we go on because our drummer Kimmie is an ex- Sea Punk in search of a new scene. She was orphaned when her habitat was mercilessly exploited by some music reporters from a free newspaper desperate for indie cred. It all got ruined quick.

To interested parties: do come to the show, but do not ask the drummer about her monocle. Do not talk at the drummer at all. 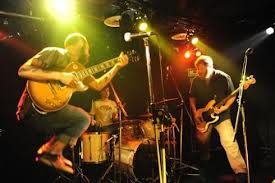 
Muggsy holds these truths to be self-evident that all bands are created equal. They just don't end up that way.
at March 03, 2013 No comments: 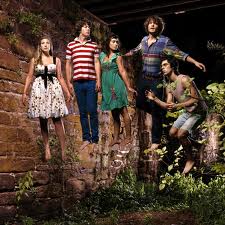 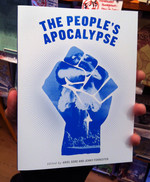 OK, so the world didn’t end again this time either, but it’s for sure gonna end next Tuesday, so plan on that. The People's Apocalypse, edited by hip mamma, Ariel Gore and writer Jenny Forrester, compiles writings related to the End Times, Doomsday, The Apocalypse or Next Tuesday, as I call it. I don't know if we are more obsessed with the end of the world now than we were ten, twenty or a hundred years ago, but we certainly have many more outlets through which to feed our morbid fantasies. Doomsday Preppers, Zombies, Global Warming, Honey Boo Boo, there's an apocalyptic feeling in the American psyche for sure, so a book like The People's Apocalypse fits right into this cultural phenomenon. The anthology contains short stories and essays which seek to explain, or at least give advice on, everything from how to prepare for the impending Zombie Apocalypse to how to raise chickens. In both fictional and nonfictional forms, writers and zinesters Tomas Moniz, Yasmin Elbaradie, Evelyn Sharenov, Derrick Jensen, Roy Coughlin, Margaret Elysia Garcia, Vickie Fernandez, Dani Burlison and many more, give their own expressions, thoughts and feelings on what can be a serious or seriously silly topic. Of course, the end of the world is millions of years away, but the end of humans? That's another story and shouldn't really be the cause for too much grief or hair pulling. Who'd miss us anyway?—Chris Auman
at March 01, 2013 No comments:


Hear that lonesome organist/He sounds too blue to play/The midnight el is whining high/I'm so lonesome I could cry—Hank McMurphy Williams
at March 01, 2013 No comments: