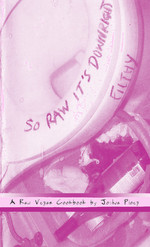 The last raw thing I ate was a raw radish, which was radically delicious, but other than that, I am not a vegan or a vegetarian and I am definitely not a rawcist. Therefore, there's a good chance that I will not be using any of the recipes in this zine cookbook. I like Joshua’s attitude though. Despite being a vegan/veg chef himself, he still likes to rib militant dieters, as he does in a short excerpt reprinted from his zine, A Chef's Tale: Strange Travelers Tales of Food, Sex, Random Occurrences & Other Culinary Disasters. If you’re a hard-liner, it doesn’t matter whether your hard line is politics, religion or vegetables, lighten up already! Whatever your diet dictates, many of the recipes in this zine sound pretty dang tasty: Curry Banana, Avocado Mousse and Plum Salad, etc. I do not agree, however, with the decision to include random black and white (black and pink actually) photos of things that are filthy, like the toilet on the cover. This is perhaps to tie in with the zine's title. Ok, I get it, but it's still kinda gross—Chris Auman 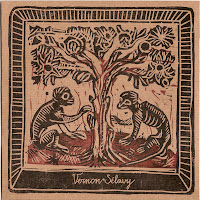 Vernon Sélavy is Vincenzo Marando (Movie Star Junkies) and Roberto Grosso Sategna (Ten Dogs) from San Salvario in Turin, Italy. Yes Italy, but listening to this record, you wouldn't necesarily know that these guys didn't live down the street from the Black Lips or The Black Keys. They don't just sing in English, they play in American. This seven inch features three tunes saturated in the sound of the American South: gospel, rhythm and blues, maybe a hint of soul and a touch of folk. These musical influences are still as sacred today as they ever were and apparently that's not a sentiment limited to these shores. Limited edition of 300 copies. Features a pretty cool two-color woodcut print by artist and fellow musician, Mojomatt Bordin—Shroudy O'Turin [Vernon Sélavy]
Always read The Reglar Wiglar!
at October 25, 2011 No comments: 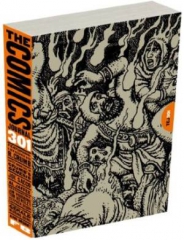 THE COMICS JOURNAL #301
When did The Comics Journal get so freakin' fat? Weighing in at one and a half pounds, this 624 page sucker features more of what you love (or hate) about comics criticism: long, detailed interviews and reviews that will take you days to read. Absorbing, or perhaps tedious depending on your mood, this is a beast I’ve been wrestling with for a few months. This issue features an interview with R. Crumb conducted by Journal publisher, Gary Groth. The topic of discussion is Crumb’s illustrated creation story, Genesis. Groth questions Crumb on the development of his technique over the years, his creative process for this project and what led him to begin his adaptation of the ultimate beginning. The interview is followed by a roundtable barrage of praise and criticism from over a half dozen art and culture critics, who either praise Crumb or take the artist to task for a variety of sins.

Also featured in #301 are sketchbook/interviews with Tim Hensley, Stephen Dixon and Jim magazine creator, Jim Woodring, from whom Groth seeks to find an answer to the question of why Woodring is compelled to draw such repulsive images. Turns out Woodring doesn't really know.

MAD Magazine fans will appreciate the transcribed, transgenerational conversation between the 89-year-old Al Jaffee (creator of the MAD fold-in) and Michael Kupperman (a current pop culture provocateur) in which the two artists talk about art as work, art as satire and art for art’s sake.

Adding further heft to the issue is Tim Krieder's arugument with himself over the question of whether or not Dave Sim’s epic Cerebus comic should be considered a major work of art? I must admit that I haven't been swayed that it should, but I also haven't made it to the end of Krieder's article and I've only made it through Volume 1 of Sim's 16 Cerebus volumes.

But wait, there's more, including an article on comics pioneer and "Dean of Amercian Cartoonists," John T. McCutcheon; an interview with Joe Sacco concerning his graphic novel Footprints in Gaza; reprints of the "Gerald McBoing Boing," strip penned by one Theodore Geisel, aka Dr. Suess; and a slew of other aritcles, criticism and opinion that I haven’t even gotten to yet—all wrapped in a fantastic Robert Crumb cover taken from his Genesis book.
Read more reviews!
at October 20, 2011 No comments: 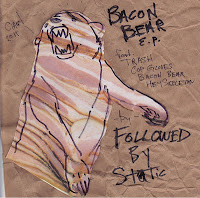 Austin, Texas band, Followed by Static, play a brand a lo-fi guitar rock that contains more than a hint of psychedelicness. The four songs on the Bacon Bear EP harkens my brain back to an earlier time of Oklahoma and the young, dosed Flaming Lips circa Here it Is. But the sound actually goes back farther than that. There's a 60s garage rock influence evident on "Bacon Bear" and "Cop Gloves," which also benefit from a bouncy countrified beat. "Trash" jumps a decade forward sounding like a 70s slow churning rock monster and the eerie "Hey Skeleton," like Austin itself, just gets weird—Rick Perry
Read more reviews!
at October 19, 2011 No comments: 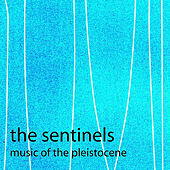 THE SENTINELS
Music of the Pleistocene (Imperius Rex)

I prefer the music of the Holocene Epoch myself, but I guess they were really just building on what was already going on in the Pleistocene Epoch, creatively speaking. At any rate, Music of the Pleistocene is a strong debut from the Chicago four piece, The Sentinels. The instrumental core of the band is comprised of a few local rock veterans you may remember as being The Tuffets a few years back. The Sentinels sound nothing like that proto metalling trio. No, this band comes at you from a straight rock angle, employing the requisite riffs and rhythms to allow vocalist Liz Elle to work it out on the mic. Which she does by trafficking in such human emotions as love, loss and lusting after girls (you read that right). The record sounds great, the songs are well-thought out, the choruses are as catchy as they should be, which leads me to the conclusion that The Sentinels are, in fact, Guardians of Rock—Clyde Drexler
Read more reviews!
at October 17, 2011 No comments:

Email ThisBlogThis!Share to TwitterShare to FacebookShare to Pinterest
Labels: Chicago music, guitar rock, Music of the Pleistocene, The Sentinels 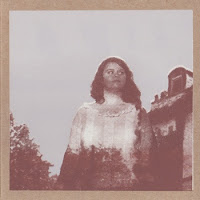 Tom Comerford, he of the long-running Chicago outfit, Kaspar Hauser, has brought forth a solo record unto the world. Using a different cast of musician friends and peers, Tom and Company recorded the eight songs of Archive + Spiral at a place called the Glamour Hole. Despite that studio's name, the resulting record is more ragged glory than razzle dazzle. While the record sounds undoubtedly like a Kaspar Hauser album, with its well-worn Americana sound and Tom's distinctive vocal delivery, Archive + Spiral might just be a little more laid back and a touch more melancholy. The songs themselves sound more subdued than his previous work. There certainly seems to be a wider variety of instrumentation: mandolin, 12-string and baritone guitars, piano, organ, even handclaps fill out the arrangements. Traces of Tom's long-time influences: early REM and the Velvet Underground become evident at a listen, (there's even a countrified version of "Sunday Morning)" and the song "Dear Stephen Hauser" sounds like an American version of an 80s Robyn Hitchcock song. Archive + Spiral fits nicely into the Comerford/Kaspar Hauser canon of releases that sound both old and new, familiar yet unique—Chris Auman
See Kaspar Hauser and The Mediums, live @ Panchos, Wednesday October 19th