Numbers run our lives, whether we are at the club throwing out our digits (cell phone numbers) to prospective sleeping companions, or in the alley behind the club giving up our PIN numbers at knife point, we can't live without numbers.

TEN (10)
Coming in first (which really means last) on our “Top Ten List of the Top Numbers of All Time” is Number Ten. Don't take it too hard, old buddy, this doesn't mean we don't love you. We appreciate your work ethic, but somebody has to come in at Number Ten and unfortunately that's you.

EIGHT (8)
Eight is great if you're a spider or an octopus, but not so great if you're John and Kate. But we're not them. We're not even Octomom, so we really do think eight is great. We wish there could be eight days a week, because that would mean one more day per week (which is currently seven days long) that we could love this number!

SEVEN (7)
Seven is heaven and a little bit lucky to boot. We'd sail the Seven Seas to please this magical numeral. Not as needy as Six or as snooty as Eight, we think the Number Seven has it going on.

SIX (6)
Three of these in a row and you've got trouble, my Christian friend, but the Number Six by itself? A-dor-a-ble! (Just keep Six away from Nine, please, this is a family-friendly Top Ten List.)

FIVE (5)
Number Five is alive at Number Five. The Number Five doesn't take any jive and that's why we love it! So give us Five. Up high. Down low. You're never going to be too slow to hang out with this affable, middle-of-the-road, go-along-to-get-along, probably an undecided voter of a number.

FOUR (4)
Four is good luck if you're a clover, but not if you are in China as the number four sounds like the Chinese word for death. Yikes! That is not so lucky, unless you are praying for death like we pray for the Number Four to someday move on up in the ranks. Watch those weird back humps, Number Three, Number Four is going to murder you someday!

THREE (3)
Three's a crowd, or so they say, but we disagree. That's why this numeral is near the top of our list. Coaches, and other overly competitive jerk wads, like to say things like: "If you're not first, you're last." (Which basically means, if you didn't win the game, you can not technically call yourself the winner). We say, not true! You can be a third place champion like our (third) favorite number, Number Three!

TWO (2)
Playing second fiddle to no one (except the digit at the number one spot on this list) is good old Number Two. Why do kids laugh when someone says your name, Number Two? So cruel. You don't care, because it sure feels good when you slide out ready to make a splash in the world!

ONE (1)
Number one on our list of the Top Ten Numbers of All Time is the undisputed champ, the greatest number that has existed or ever will exist, the perennial top dog—our Spanish speaking friends call this guy "Numero Uno" for good reason—yes, it's Number One! One is the loneliest number only if you believe Three Dog Night, but we don't. We've never trusted Three Dog Night about anything before and we're certainly not going to start listening to them dis our favorite number. Hey Number Ten, lose that Zero and get with a hero!

Thank You For Your Relentless Pursuit of Excellence -- April 2020 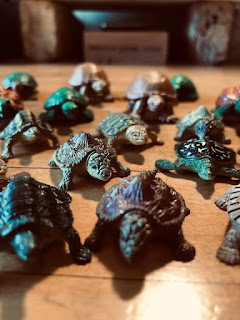 Pretty crazy, eh? This whole COVID-19 business. I'm kinda
tired of thinking about it. Who knows what’s going to happen next week, next month, or even tomorrow. In Illinois, Governor Pritzker has extended the stay-at-home orders through the end of May. ¡Ay caramba!