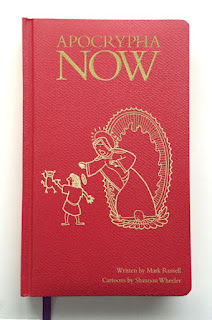 Mark Russell is back with another installment of his humorous summaries of religious texts (with illustrations by Shannon Wheeler). For those unacquainted with the previous Top Shelf book God is Disappointed, I recommend you read it, but only if you like to laugh. Out loud. Literally. As ignorant as I am of religious writings, despite years of church going as a youth, I was basically, if not entirely, unaware that there was stuff that actually got cut OUT of the bible. I had no idea the Good Book had such good editors. The reasoning behind these omissions, as Russell explains in the introduction, is they were just too off-the-wall to be taken seriously. Seriously? This is the bible we're talking about, after all. Its chock full of murder, mayhem, infanticide, incest, talking snakes, immaculate conceptions, resurrections, and all that. Forgive me for not thinking that the appearance of a unicorn would put it over the top. That's just an example, there are no unicorns in this book. Sorry unicorn nerds.

Russell likens the Ancient World to a dance-off where each tribe tried to impress the other with their religious stories. Deemed too batty even by biblical standards, these outtakes were lovingly compiled in the Apocrypha. The Apocrypha is to your average Christian as Tolkien’s Silmarillion is to casual Lord of the Rings fans: if you're into that world it's nice to know these stories exists, even if you will never, ever read them. If I was a bible fan, I guess I would liken it to the lost Clash album that was considered too all over the place (by everyone but Mick Jones) to release. 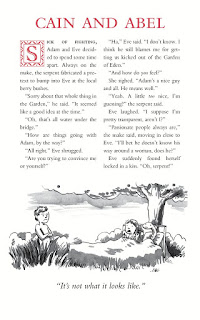 Russell puts his sharp wit and keen sense of funny into giving the gist of these lesser known Words of God and Shannon Wheeler once again lends his talents by contributing his spot on cartoons. (Wheeler’s work will be familiar to you if you read the New Yorker and/or are familiar with his long-running Too Much Coffee Man comics series.)

Religion has always bored me to tears, but these books I can handle. So, if the Bible ain't your bag, but you'd still like to learn what all the fuss is about, Apocrypha Now

is a good alternative—Chris Auman

READ REVIEW OF GOD IS DISAPPOINTED IN YOU

BUY!
Buy both books in a boxed set. The perfect Christmas (yeah, I said it, Christmas) gift for that special Christian in your life!