ZINE REVIEW: Under the Radar 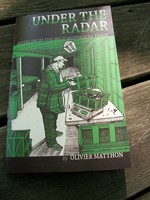 Now here’s an occupation I’ve given zero thought to previously: Mushroom Picker. I think I would prefer the job title of Fungus Finder or maybe Shroom Wrangler, personally. The point is this: someone is out there picking those wild mushrooms. I went morel hunting once as a kid, out there in the sticks of rural NW Illinois where I grew up. We started in the very early morning, but not too early for my much older cousin, Dickie, to crack a beer. It was fairly exciting, kinda like Easter egg hunting but harder, and nothing tastes like a breaded and fried morel. Even though they look pretty gnarly, you never forget the taste. That was a purely recreational pursuit, however, and many Mushroom Pickers rely on the picking season to support themselves year round.

Under the Radar was written by picker, Olivier Matthon, and it chronicles his time perusing the forests of the Pacific Northwest in search of edible shrooms and a hard-earned buck. (These aren't psychedelic mushrooms, btw, but the kind chefs and restauranteurs will pay good coin for).  Olivier has held a variety of jobs on the outer edges of the workforce and mushroom picker is right at home on his résumé with his other occupations as cherry picker, tree planter, clam digger and firewood hawker.

Under the Radar alludes both to the hunted fungi that lay half hidden in the undergrowth, but it also refers to the fringe dwelling hunter. Mushroom Pickers exist off the grid and that makes them outsiders and a part of an underground economy and society of nomads. In addition to the sketchy financial rewards of pickers, there are dangers as well. Sometimes I suppose you might find yourself on the wrong side of a fence, and don't forget the marijuana growers. Where there's drugs, there's money and thugs with guns to protect them both. Also, as with many industries, there is an immigrant class who will pick for cheaper and who lack the experience and the reserve to leave the younger mushrooms alone until they can grow into a more valuable future crop.

All in all it’s a hard way to make a buck, but it seems to be about more than money for the pickers. You don’t become a mushroom picker to get rich. It’s more likely you’re already living off the land and by your wits, and this kind of work suits the type of person who doesn’t want to be tied down to one job or one place, for whatever reason. This makes Under the Radar a very engaging read if you're into subcultures as zine writers and readers often are—Chris Auman