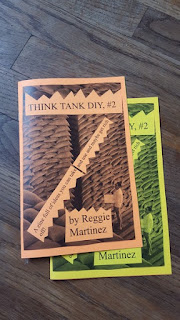 
Brevity is the soul of wit, said some guy one time, and Shakespeare was right. Brevity also makes for easy-to-read zines like Reggie Martinez’s Think Tank DIY. In these few pages of issues one and two, Reggie offers up his ideas for a number of movie, cookbook, novel and restaurant projects. He offers them all for free and wishes anyone well should they try to turn one of them into a profitable business venture. Reggie asks for nothing in return, not even credit for the idea. That said, many of these ideas would be impossible to pull off, or at the very least, not worth the time and money necessary in the attempt. A 24/7 doughnut delivery shop called Dough Not Leave the House (plausible) an Angry Birds parody titled Angry Nerds (I can see it) a parody artist called Natalie Merchant of Venice, who sings lines from Shakespeare (see above) to the tune of 10,000 Maniacs songs (pretty narrow demographic, but sure), these all could be accomplished, but at what cost in human suffering? Anyway, you get the idea about Reggie's ideas. The best idea he's had so far may be this zine about his cockamamie ideas.
at November 12, 2015 No comments: