SONG OF THE DAY: Hunters, "Narcissist" 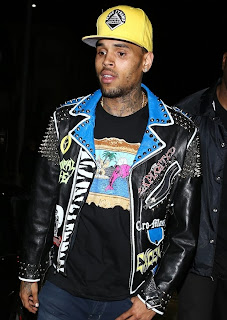 SONG OF THE DAY: Gap Dream, "Shine Your Love" 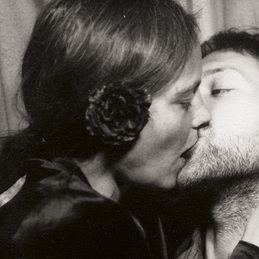 Scout Niblett sought solace in Rollins Band for her seventh full-length, It’s Up to Emma. That’s not necessarily evident from the music. It’s more of a spiritual kinship and the drawing of strength and inspiration. Catharsis, as it were. It’s Up to Emma, (Emma being Ms. Niblett's real first name) is a nine song dissection of a relationship gone all crumbly and awry. Very crumbly and very horribly awry. Each song on the record seems to beg a different question of how, why and what the fuck? There’s accusation, revelation, venom, confusion, wishful thinking and heartache all wrapped up in a handful of bare bones rock songs delivered with short stabs of pain and then longer stabs of anguish. There’s not much joy to be found here unless you find joy in being bummed out. "Gun" is a menacing tune that promises the threat of a revenge served hot and steaming straight out of the barrel of a gun. Like most of the tracks, “My Man” is sparse, just guitar, some strings and Scout asking, "Could we have made it somehow?” Probably not is probably the answer. “Could This Possibly Be?” is another questioning tune in which the answer this time is, yes. "Second Chance Dreams” starts off gently enough only to have the anger simmer over in Scout’s acutely enunciated syllables, which then get underlined by a martial snare drum. “No Scrubs” is that “No Scrubs” with Scout straight up calling out homeboys for their overall lack of flyness. This is a record of someone dealing with some shit, going through some shit and feeling pretty shitty, but once it's out, then it's really over. One would hope—Chris Auman
at September 08, 2013 No comments:

Toxic Avenger Soundtrack "Is This Love" 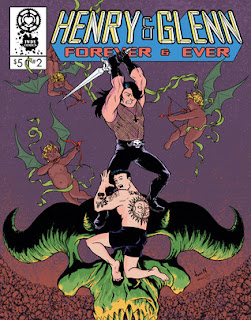 It seems as though the saga of Henry and Glenn has sparked somewhat of an indie cottage industry. There are Henry and Glenn t-shirts, stickers and posters commemorating the comics union of these two punk rock icons. The series has even inspired imitations, like gross out pro, Johnny Ryan, who threw his whip into the ring with a comic in Vice titled “Mark and Gary Forever” featuring Devo’s Mark Mothersbaugh and the synth fiend Gary Numan staring as a not-so-ambiguously-gay duo. For the uninitiated, Henry & Glenn Forever & Ever is the further adventures in a comics compilation depicting Henry Rollins (Black Flag, Rollins Band) and Glenn Danzig (Misfits, Samhain, Danzig) as gay lovers. Before you roll your eyes (which you are certainly justified in doing), it should be noted that these comics take the joke outside and beyond the juvenile level of dirty pictures drawn on notebook paper during 12th grade history class (I wasn't the only one who did that, right?). In fact, the joke is getting funnier. Can Hank Rollins take a joke? He’s getting better at it. Can Glenn Danzig? Nah. In a 2011 interview with Nardwaur the Human Serviette, Rollins warned us of such. Henry says he believes in the 1st Amendment but, while he admits to autographing copies for fans, he's never read one. He surmises that Glenn is not a fan. Does that make this all the more guilty of a pleasure? Yes, yes it does.
In this second issue of the series curated by Tom Neely and Igloo Tornado, Neely starts us off with “Children of the Grave” which depicts Glenn as a satanic superhero who must battle his demonic mother in monster form. Neely also apes the Sunday funnies style of Nancy and Sluggo in chapter two of a story line which again has Danzig dealing with mommy issues. Ian Mackaye (Minor Threat, Fugazi) makes an appearance as a Sluggo-type bully and Glenn’s mom looks like she could count Archie and Jughead among her progeny. Other recurring characters are Hall & Oates as neighborly satanists. Why? Why not is the obvious answer here.
Next, Mark Rudolph gives us “How the Chores Kill” which features mostly Glenn performing Herculean labors at the request of Johnny Cash and Roy Orbison. (Glenn seems to be the focus of the comics a little more than Henry.) Josh Bayer turns in “Same Time Next Year” which follows the budding friendship of the pair starting in 1982 with a stop in 2013 and a glimpse into the wasteland that is sure to be 2038. Andy Belanger, Katie Skelly and Tom Scioli provide pinups of our heroes at the tail end of the book.
When will the joke get stale? Who knows? These characters seem to have taken on lives of their own. They never really were based on reality in the first place, so the fact that they're based on real life cultural icons is incidental at this point. It’s just an entertaining comics series and Henry and Glenn aren't powerful enough to stop the antics of their comics counterparts anyway. A third installment is already in the works so: That’s not all folks!—Chris Auman
at September 02, 2013 No comments: