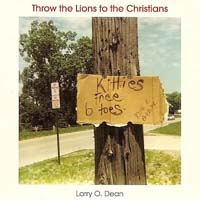 Chicago via San Francisco via Michigan poet/writer/musician Larry O’Dean has many accomplishments under his belt. He’s an award-winning poet, he’s a Poet-in-Residence for Chicago Public Schools, he’s worked with fellow Flintian, filmmaker Michael Moore, he’s had his work translated into bunches of different languages and such—but enough of that press release stuff. Throw the Lions to the Christians is a re-release of Dean's 1997 album. Dean writes straight-forward pop tunes that rock in the right places. His songs hearken back to the great singer-songwriter days of the 70s, and I'm not talking about your Fogelbergs and your Chapins or even your Lightfoots, but rather I refer to your Lowes and your Costellos. A little less angry than those fellows perhaps, but just as earnest. In fact, Larry sounds at times like Daniel Johnson in his more excitable moments. And there's always something to be happy about. Dean pens paeans to good days (“Well-Ordered Day”), humorous jibes at plastic surgery (“Nose Job”) and everyday topics that need a new look and a light-hearted spin without being too saccharine—Jayne O. Wayne [Larry O. Dean]